Ivanhoé Cambridge and Claridge will expand on an investment partnership launched two years ago, adding a second $100-million vehicle for real estate projects in Quebec urban centres, with a focus on Montreal and Quebec City. 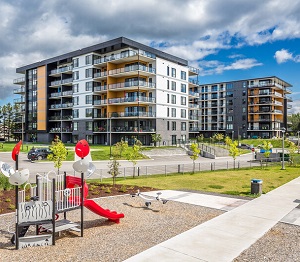 The two partners, which both have a strong presence in Quebec, will continue investing alongside local developers.

“We are proud to be investing in the development of promising projects in Quebec,” said Ezio Sicurella, executive vice-president, residential, hotels and real estate investment funds for Ivanhoé Cambridge in a release.

“These projects, put together by Quebec developers, are enabling us to fulfil our investment goals while supporting the industry’s growth. Moreover, each project generates substantial economic activity at the regional level and creates jobs at numerous small and medium-sized companies.”

The first $100-million Quebec fund has invested in nine residential projects in Greater Montreal and one in the Quebec City area. All of the projects are under construction or have been completed.

“We are highly satisfied with the investments we have made up to now in real estate development projects,” said Wayne Heuff, executive vice-president and managing director, Claridge Real Estate, in the release.

“By nature, each project is complex and different and our developer-partners’ skills are brought to light. The collaboration with Ivanhoé Cambridge has been successful thus far, and we remain confident that this investment platform will enable both companies to meet their performance goals and to help Quebec developers achieve success and grow their businesses.”

Among the projects in which Ivanhoé Cambridge and Claridge have invested are:

Vertically integrated in Canada, Ivanhoé Cambridge invests internationally alongside strategic partners and major real estate funds which are leaders in their markets. Through subsidiaries and partnerships, the company holds interests in more than 1,000 buildings, primarily in the residential, office, retail, industrial and logistics sectors.

Ivanhoé Cambridge held more than $60 billion in assets as at June 30, 2018, and is a real estate subsidiary of the Caisse de dépôt et placement du Québec, one of Canada’s leading institutional fund managers.

Founded in 1987 by Charles Bronfman, Claridge is an investment firm headquartered in Montreal. It represents the interests of the Stephen Bronfman family. It is actively engaged in managing a diversified portfolio of third-party investments as well as direct interests in companies active in the food, technologies, energy, real estate and entertainment industries.